Have you ever tried to count all the stars in the night sky? Well, you aren’t the only ones counting stars, astronomers are doing it too!

It might seem like a difficult job, but stars can reveal some big secrets about the Universe around us. They can tell us how gigantic galaxies form and grow and where different chemicals come from.

Scientists have been investigating the number of massive stars in a group of distant “starburst galaxies”. A starburst galaxy’s super power is making lots of stars – it can churn out a new star about 10,000 times faster than a normal galaxy!

But counting the stars in these galaxies isn’t as simple as it sounds. Starburst galaxies have heaps of star-making material (cosmic dust and gas) that act like a fog hiding the stars inside.

Instead of looking at the stars directly, scientists have developed a new trick: they look at the chemicals inside these galaxies too.

The size of a star has a big impact on it’s life. Massive stars shine more brightly, but at a high price - they live much shorter lives than their smaller siblings. They also spread different chemicals into the cosmos, when they die.

The discovery has scientists scratching their heads about how stars are born. Previously, it was believed that new born stars could reach a maximum size of about 150 times the mass of our Sun. Now, it’s possible they could reach double that size!

Our Sun is an average sized star with a lifespan of around 10 billion years. The most massive star ever found (called R136a1) will only live for around 3 million years. That means R136a1 could live and die over 3,000 times within our Sun’s lifetime! 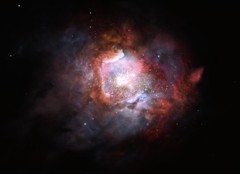