Various regions around the world have experienced extreme weather conditions this year, but nothing quite as extreme as the biggest storm in our Solar System. The gas giant Jupiter is home to the famous Great Red Spot. This giant storm is a mystery to scientists because it is getting smaller and smaller every year.

Jupiter is over 100 times bigger than Earth! The giant planet has two and a half times more mass than all the rest of the planets in our Solar System combined. This planet is also full of many mysteries.

Jupiter is made up of gasses that form cloudy belts that can even be seen with a small telescope. This gas giant is also seen by larger telescopes, like the Hubble Space Telescope. The Hubble Space Telescope has captured a new image of Jupiter this year that shows us the beauty and mystery of the Great Red Spot: a giant storm of red clouds that is larger than the Earth.

The Great Red Spot’s storm has been raging for over 150 years. The Hubble Space Telescope has watched the storm for many years and has noticed that it is getting smaller. In fact, the storm’s width is decreasing by just under 1000 kilometres each year - that’s over twice as long as the Grand Canyon! Astronomers do not understand why this is happening, or why the spot is red!

Jupiter is also home to other storms that can be seen as brown and white ovals or circles. These storms can last for just a few hours or as long as a few hundred years. Jupiter’s winds can reach speeds of up to 650 kilometers per hour: over three times faster than the speeds of a tornado!

The Hubble Space Telescope will continue to watch Jupiter to learn more about its mysterious Great Red Spot and its other storms. 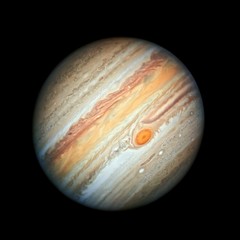