Look around the room you’re in right now. It probably contains lots of objects in different colours and materials. Yet, all of these things are made from the same stuff: atoms. There are a lot of different types of atoms which we call the “chemical elements”. But some of these atoms are made up of more stuff than others, and require big violent events in space to be created.

For the first time, astronomers have detected a very heavy element that was created when two neutron stars collided. Neutron stars are the ultra-dense cores left behind after a massive star reaches the end of its life and explodes.

To say an element is heavy is to mean that it has lots of protons, one of the building blocks of an atom. This special heavy element that was detected recently in space is known as strontium and it is even used here on Earth to make fireworks.

This discovery tells us that the heavier elements in the Universe can form from these violent events and gives us a new piece of the puzzle for learning where all of the elements came from. 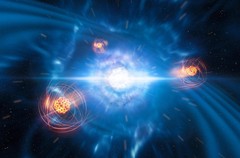