Our solar system is now playing host to a visitor from very far away.

Comet 2I/Borisov is not from our Solar System. In fact, we don’t know where it came from! This comet is only the second object that scientists have observed that has arrived here from another planet system elsewhere in our galaxy.

Comets are made of rock, dust and ice, so they are sometimes called “dirty snowballs”. If they stray too close to the Sun, the heat evaporates some of the comet’s ice. This creates a fantastic “tail” that can be seen as the comet travels across the night sky.

This image was taken from the Hubble Space Telescope of the comet on 12 October 2019.

The comet is travelling toward the Sun and will come the closest to our star in December. Next year it will travel out of our solar system once more, perhaps one day in the distant future it will enter another system.

The comet is currently travelling at 150 000 kilometres per hour, this is almost 500 times faster than a race car!

This Space Scoop is based on a Press Release from ESA/Hubble.

On average, only one comet per year can be seen soaring across the sky with the naked eye. If you're very lucky, you might have seen one for yourself, and this picture will look very familiar. 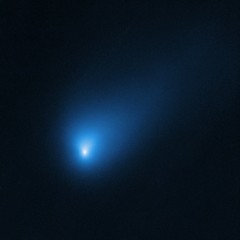