Although it may look like popcorn, this is in fact the clearest image of the Sun ever taken!

This image was taken by a solar telescope on the top of a volcano in Hawaii. This picture shows us a pattern of “boiling” gas on the Sun’s surface. Each of these bubbles are roughly the size of Texas. It is through these bubbles that heat and energy from deep inside the Sun is brought to the surface. The brighter spots in this image are the top of the bubbles where the heat is rising. The darker lines around the bubbles are where the material is cooling and sinking.

Just like on Earth, the Sun has spells of bad weather, with high winds and showers of rain. But unlike the all-too-frequent storms on Earth, rain on the Sun is not made of water but electrically charged, superheated gas, called plasma. When Magnetic eruptions on the Sun send solar material in our direction, it can impact air travel, disrupt satellite communications and bring down power grids, causing long-lasting blackouts and damaging technologies such as GPS.

These bright spots may help scientists understand how and why the Sun’s envelope of hot gas, called the corona, is more than a million degrees!

We can only see the Sun’s corona during a solar eclipse, when it appears around the Sun like a silvery halo.

This Space Scoop is based on a Press Release from AURA. 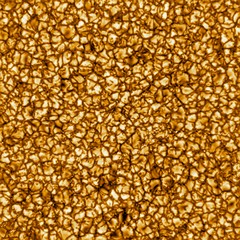