When a butterfly experiences metamorphosis, it goes through several stages of change throughout its life: from an egg, to a caterpillar, to a chrysalis cocoon, and finally into a beautiful adult butterfly.

Astronomers have also observed the beauty of metamorphosis, but on the most giant scale imaginable. This picture captures the very moment when an old star first starts to change its environment.

Stars like our Sun grow in size to become Red Giants in the final stage of their lives. Then, like a last gasp of breath, they puff away their outer layers of gas. This gas floats away into space and forms beautiful and striking clouds, which are called planetary nebulae. Planetary nebulae get their shape from their star and their surroundings, such as whether the star has planets or other stars nearby.

This star is shooting out high speed jets of gas that are colliding with the surrounding dust and gas to create this beautiful display.

Much like butterflies, planetary nebula come in many beautiful shapes and colors. Some are spherical, but others show complicated structures, including hourglass shapes or (fittingly) butterflies!

Planetary Nebulae have nothing to do with planets at all - so where did the name come from? The word “nebula” means “cloud” in an old language called Latin. But when these objects were first discovered, astronomers thought that they looked similar to how the planets Uranus and Neptune look in small telescopes. And, well, sometimes names just stick! 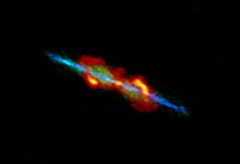