Astronomers have found telltale signs of a baby planet being born.

Thousands of exoplanets have been found so far, but we still know little about how they are formed. What we do know is that planets are born in dusty discs surrounding young stars. This happens when cold gas and dust clump together. By closely examining this nursery, astronomers now hope to understand how they are born. Astronomers have never observed direct evidence of a baby planet coming into existence within such a disc, until now.

Around the young star called ‘AB Aurigae’ lies a dense disc of dust and gas. Such discs have been detected around many young stars before, but a team of astronomers using the Very Large Telescope of the European Southern Observatory found a peculiar feature that they hadn’t seen before. In the disc of AB Aurigae, they observed a clear spiral structure with a twist that marks the spot where a planet may be forming. This twist feature could be the first direct evidence of a baby planet coming into existence. Until now, astronomers had been unable to take images of these young discs that are sharp enough to reveal this twist.

The image above shows this twist feature as a spiral of dust and gas around AB Aurigae, located 520 light-years away from Earth. The black central region in this image is in fact the star. We do not see the star in this image because it has been purposefully blocked out by the telescope’s instruments so that astronomers can study the disc around it. The very bright yellow twist area underneath this black central region is believed to be the place where a planet is being made. This baby planet is located at about the same distance from the star as Neptune is from our Sun.

How The Twist Is Formed

Spiral structures, like the one in the AB Aurigae disc, have been seen before in discs surrounding other young stars. Spirals of this type signal the presence of baby planets. The planet’s gravity ‘kicks’ the gas, creating a wave in the disc. This is similar to how a boat creates waves by pushing water away while moving through it. As the planet circles around the star, the waves of gas and dust in the disc create spiral arms.

The observations of this twist were made with the European Southern Observatory’s (ESO) Very Large Telescope (ESO’s VLT). This telescope sits atop the Cerro Paranal mountain in the Atacama Desert of northern Chile. Because of the clear skies in this environment, it can achieve clear observations of the cosmos. The VLT is actually made up of four large individual telescopes that can operate separately or together as a team. Each of these telescopes hosts a large mirror that concentrates the light that is captured by the telescope. These mirrors each measure 8.2 meters in diameter - that means each mirror is about as tall as a giraffe!

Each of the four telescope’s that make up the European Southern Observatory’s (ESO) Very Large Telescope can detect objects in space that are roughly four billion times fainter than can be detected with the naked eye! 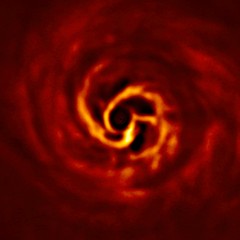 eso2008b
The Twist Marks the Spot