On 23 March, more than 450 astronomers, science communicators and educators gathered in Fukuoka, Japan, to attend the Communicating Astronomy with the Public Conference 2018. The Astronomy and Society Group from Leiden University Observatory organised several workshops and talks, featuring the International Astronomical Union's Centenary (IAU100), the Universe Awareness and Space Awareness projects.

This year’s conference is the largest in the history of the Communicating Astronomy with the Public (CAP) conference, having over 450 astronomers, science communicators, educators and representatives from media outlets from all over the world. The participants travelled to the Fukuoka Science Museum in Japan to share and discuss developments and best practices in astronomy communication. During the 5-day conference, next year’s celebration of the International Astronomical Union’s 100th anniversary was officially announced.

The Astronomy and Society Group of Leiden University played a prominent role in this international conference. CAP 2018 was organised by IAU Commission C2, a think/do tank that assembles the astronomy communication community and promotes initiatives for exploring new ways to communicate astronomy with the public. Pedro Russo of Leiden Observatory is the president of the IAU Commission C2. During this CAP conference, multiple talks and workshops were given by members of the Astronomy and Society Group from Leiden University.

Search for #CAP2018 on Twitter for updates from CAP 2018 attendees and @CAPconference for the organising committee. Find more information on the CAP website: communicatingastronomy.org/cap2018/

Presentations and workshops by Leiden Observatory

Jorge Rivero presented IAU100, the 100 year anniversary of the International Astronomical Union, which will be celebrated around the world next year. He also organised two workshops, chaired a parallel session on IAU100 and took part in a special session on IAU100 featuring a video message from Ewine van Dishoeck.

Han Tran shared the results of her research that suggest using Space Scoops in class is more effective than other news sources. A special Space Scoop newspaper was created for the CAP2018 conference, with the best Space Scoop articles selected by the volunteer translator community.

Achievements and lessons learned from the EU Space Awareness project, which concluded in March 2018, were presented by Wouter Schrier. He was also asked as official photographer for the conference.

Hannah Harris talked about becoming and staying relevant to local communities and effectively doing outreach. She also hosted an unconference session about the role of Wikipedia and Wikimedia Commons in astronomy education.

Thilina Heenatigala discussed how to effectively use social media for astronomy communication through storytelling on his plenary talk, and presented Star Parties Flagship Programme at the IAU100 special session. He also organised workshops on debunking pseudoscience in Asia, training on elevator pitches, and IAU100.

During a parallel session, Michael de Korte spoke on analysing email newsletters in public engagement of astronomy, using the Universe Awareness newsletter as an example.

On 30 March, a follow-up meeting on astronomy education was held in Kagoshima, where the Astronomy and Society Group presented Leiden Observatory projects Universe Awareness, Space Scoop and astroEDU. The meeting enabled local school teachers to communicate with international educators from Universe Awareness, IAU100, International Day of Light, and other astronomy (education) organisations. 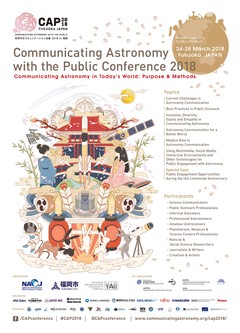 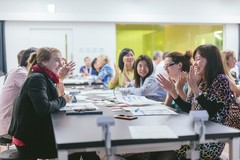 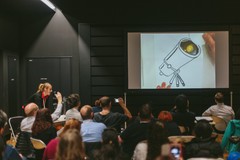 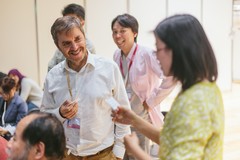 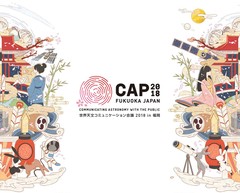