On 4 October at the HundrED Innovation Summit, Universe Awareness (UNAWE) was officially announced as one of the HundrED's 100 Global Inspiring Innovations in Education.

A Global Inspiring Innovation in Education

HundrED’s mission is to help schools change by seeking and sharing inspiring innovations in K12 education. “Without inspirational innovators, such as Universe Awareness, education wouldn't continue to improve and thrive, often in the face of adversity,” says Jessica Spencer-Keyse, Global Research Lead at HundrED.

“UNAWE uses the beauty and the enormity of the Universe to inspire young children,” says George Miley, its founder and Leiden University Astronomy Professor. The aim is twofold, to show them that science and technology are exciting and foster the spirit of world citizenship. “Being recognised by HundrED is both humbling and a great honour.”

To announce the 100 innovations, HundrED organised a high profile, invitation-only summit in Helsinki, Finland, for the world's leading education innovators. Universe Awareness uses an innovative approach to ensure that that teachers and parents around the world will have excellent educational material available for making children aware of the Universe in which we live and achieving its two goals.

According to Spencer-Keyse: “It has been truly inspirational to conduct in-depth research into what the next 100 years of education could look like. We look forward to sharing Universe Awareness’ exciting innovation, online and offline, with the world to scale and spread.”

During the last year, HundrED has been searching the world for 100 inspiring innovations in education. Led by its own in-house research team, each innovation has been carefully assessed and reviewed by an expert advisory panel.

The 100 innovations are selected using an evaluation model that consists of three stages: professional assessment (by the advisory board), self assessment (by a innovation developer) and peer assessment. The innovations are divided in five categories that answer questions such as: What are skills will be needed by future teachers, what is the role of the teacher, how should learning be assessed and what is an effective learning environment?

Universe Awareness (UNAWE, meaning ‘with you’ in Zulu) is a programme to inspire children from 4-12 years old with the wonders of our Universe. In 2006, the UNAWE International Office was founded at Leiden Observatory, Leiden University, the Netherlands. In 2011, UNAWE received a European Union grant to fund UNAWE for three years in six countries. Since then, the UNAWE network has grown to 63 countries worldwide.

Thanks to this network, including several thousands of dedicated educators, teachers and astronomers, UNAWE has now reached over half a million children worldwide. Furthermore, in the last five years, 9,000 teachers were trained, 10,000 Earth Balls and 1,050 Universe in a Box kits were distributed worldwide, and 356 Space Scoops were published in 33 languages.

Universe Awareness has been recognised for its educational value by Science Magazine with its Science Prize for Online Resources in Education (SPORE) award in 2011 and Universe Awareness’ Earth Ball was awarded Best Educational Resource Award by Scientix in 2015. Space Scoop was selected as one of the Great Websites for Kids by the American Library Association in 2016.

HundrED is a non profit organisation based in Finland that selects 100 inspiring innovations in K12 education from around the world annually. HundrED Global consists of ambitious, global innovations that are changing education worldwide. These projects are transforming K12 education and are changing the way children, and young people are educated, with new ways of learning, teaching, assessing and leading. These innovations range from small, one classroom projects to huge, nation-wide initiatives. The key criteria is that they are groundbreaking, scalable and replicable. 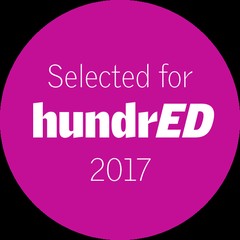