On 17 January 2018, a scientist and artist partnership from Wales, UK, launched a kickstarter campaign for an educational comic book for kids named Ada's Adventures in Science.

The new comic is a special edition that includes a compilation of three earlier Ada comics and new artwork, and will come with additional educational activities. The kickstarter campaign aims to distribute the educational science comics to children around the world.

"The idea behind Ada and her stories is that anyone can do science, if they can ask questions and work together to solve problems,” say creators Edward Gomez and Laura Sorvala. “We want Ada to be an inspiration to everyone, no matter who they are, where they live, or what their background is."

The Ada comic books will be available with a creative commons license allowing anyone to freely use and distribute them. The campaign’s goal is set at 6000 GBP (6750 EUR) and will be used to print 20,000 copies of the 24 page science comic book, distribution to schools around the world and the creation of new artwork. Funds raised beyond the pledge goal will enable free distribution of digital prints for e-readers.

1500 printed copies of the first Ada comic book have already been distributed, through teacher training events, school workshops, and public exhibitions in Wales, California, and the Netherlands. “Their popularity amongst kids and adults at these events has motivated us to seek crowdfunding to share Ada with a much wider audience and inspire kids around the world.”

Collaboration with the astronomy education community

To identify schools and distribute these educational resources around the world, the creators will be working with leaders in astronomy education and using astronomy for development: Las Cumbres Observatory (dissemination node), Universe in the Classroom, Universe Awareness, and the International Astronomical Union’s Office of Astronomy for Development.

Initial support for creating the art for these comic books came from the Welsh Government, Royal Astronomical Society and Las Cumbres Observatory.

As a scientist and artist partnership, Edward Gomez (education director at Las Cumbres Observatory) and Laura Sorvala (independent illustrator) created the "Ada's Adventures in Science" comic book series. They wanted not only to excite kids about science but to empower them to do science.

The central character, Ada, starts off as a school girl excitedly talking about her science heroes to friends on the school bus. Over the course of the series Ada goes to high-school and finally becomes a professional scientist, where she fulfils her dream of being part of an amazing discovery.

To help identify schools around the world for distribution of Ada's Adventures in Science, Las Cumbres Observatory will be working with leaders in astronomy education and using astronomy for development: Las Cumbres Observatory, Universe in the Classroom, Universe Awareness, and the International Astronomical Union’s Office of Astronomy for Development. 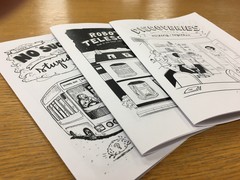