Throughout 2017 GalileoMobile organised astronomy outreach activities on the island of Cyprus to share astronomy with the children from both the Greek-Cypriot and Turkish-Cypriot communities. In a new documentary on this project, you get an overview of the types of activities provided. Moreover, organisers and children tell about their experiences with the project.

The aim of the project was to get the children excited about astronomy and the universe while promoting meaningful communication and a culture of peace and non-violence. The project is named "Columba-Hypatia Project: Astronomy for Peace. "Columba is a constellation, the 'dove' constellation, which is a well-known symbol of peace. So we thought it would be nice to have this as the name of our project", tells Francesca Fragkoudi, one of the astrophysicists of GalileoMobile. The project reached 150 students, 30 teachers and 100 people of the general public.

Afterwards, the children showed that this message really came through. "There are too many things we don't know about each other", says one of the children. "That's why we shouldn't only see things from our own point of view." One of the others immediately agrees with her. "We should all be equal." Students made their own 3D-constellations.

Children from the different parts of the island were grouped together so that they needed to communicate during the assignments although they did not speak the same mother language. By using English and helped by the educators, they learned more about each other's language, favourite food and music.

One of the exercises was to design a golden record based on the Voyager Golden Record that was sent with the Voyager Spacecraft launched in 1977. This golden record was meant for any intelligent extraterrestrial life form that might find the spacecraft to get an idea of life on earth. The children had to think of what is in their opinion representative of all of Cyprus to put on this record. In this way they got the opportunity to think about properties of both parts of the island.

To get an idea of the project and to see how the project was received by the students, you can watch the following documentary.

The documentary on the Columba-Hypatia Project 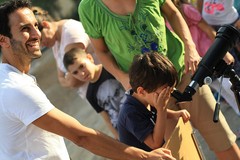 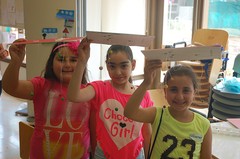