The December 2011 issue of the Communicating Astronomy with the Public journal will feature an article by Dutch astronomer Peter Barthel, in which he analyses illustrations of the Moon on gift wrap and children’s books in the Netherlands and the USA.

On the basis of research conducted during the winter of 2010-2011, Barthel concluded that the crescent moon and Half Moon are often drawn incorrectly on gift wrap and in books dealing with Santa Claus and his Dutch peer Saint Nicholas, or Sinterklaas. Where the illustrator would actually like to depict an evening event, often the third-quarter Moon – the morning Moon – is drawn. This lack of knowledge concerning the physical origin of the Moon phases is found to be widespread in the Netherlands but also clearly exists in the USA, and is quite possibly a worldwide phenomenon. The author also investigated moon illustrations related to Halloween, finding similar results, and concludes: "Many people do not seem to know that a waning crescent moon rises around 2 or 3 a.m. ..."

Although Barthel spends most of his time investigating active galaxies and active galactic nuclei, he also has a keen interest in science communication and education. "If this research stimulates people to see for themselves what the moon phase is during the evening – and to understand it – this tongue-in-cheek research will have been well worth the effort!" 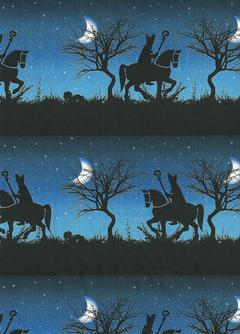