The UNAWE team in Iceland, in cooperation with EU Universe Awareness and local supporters, is giving every kindergarten and primary school in Iceland an EU-UNAWE Earth Ball. The goal is to increase children’s interest in science and nature, and teach them about our home planet in fun and creative ways. Illugi Gunnarsson, Minister of Science and Education in Iceland, handed out the first ball to a local kindergarten in Reykjavik, the country's capital, today. At the same time, an Icelandic astronomy website for kids was opened, Geimurinn.is, which offers interesting news articles about stargazing, astronomy and geology, along with UNAWE's Space Scoop, the latest astronomy news for children.

The Earth Ball is a light, blow-up version of our planet that works as an effective resource for the classroom, to help students get to know their place in the Universe. It offers a unique perspective that makes it easy to teach children all sorts of facts about the planet: from its shape to its the axial tilt, its surface composition and more! National borders are not marked on the EU-UNAWE Earth Ball, emphasizing that we are all citizens of a single planet.

“In 2010, we gave every primary and high school in Iceland a Galileoscope. We always wanted to do something for kindergartens as well, and we believe the Earth Ball will be of great use and will hopefully inspire kids to learn more about our home planet“ said Sævar Helgi Bragason, UNAWE national coordinator in Iceland.

The project was supported by local companies and the international education project EU Universe Awareness. EU-UNAWE is currently in the process of distributing almost 10,000 Earth Balls all over the world, to few thousand schools. Iceland is the only country where every kindergartens and elementary schools will get a ball.

Gunnarsson is very enthusiastic about the new addition to the country's schools, he told us: "The Earth Ball is a very innovative classroom resource that will, without a doubt, be of great use in kindergartens and primary schools. Increasing general knowledge of natural science is extremely important for a nation that builds its economy, as much as we Icelanders do, on natural resources. The fact that there are no national borders on the Earth Ball emphasizes that we really are one family and it is in our collective interest, no matter where on Earth we live, to utilise nature in a responsible and sustainable way."

The EU-UNAWE Earth Ball comes with an activity book brim-full of ideas about how to use the tool for teaching astronomy, geography, environmental awareness, global citizenship, and even physics and biology. You can download the activity book as a PDF, or access the source files (InDesign) at: www.unawe.org/resources/education/Earthball_booklet/ 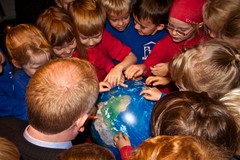 EarthBall_is
Every kindergarten and Primary School in Iceland Gets an EU-UNAWE Earth Ball!