Children that were affected by the Supertyphoon Haiyan in the Philippines had a different kind of treat last February through UNAWE’s national programme coordinator, Dr. Rogel Mari Sese and his team.

With a grassroots approach, a total of 178 kids from various levels of Balud Elementary School in Basey, Samar participated in an astronomy outreach activity aiming to teach these children about the Earth and the Sun. Instead of using modern technology such as computers or telescopes, the team made use of the UNAWE earthballs to teach kids about our planet and its features.

Together with the team and school teachers, the children first introduced themselves by passing around the UNAWE earthball. After this, a brief lecture was conducted about the Earth and the Sun using the local language. By showing the location of the Philippines on the UNAWE earthball, they were also taught how typhoons are formed and why they often hit the Philippines particularly in their area.

Aside from listening to the lectures, the kids made corresponding artworks of the topics discussed. Using only school supplies that are available in their area, such as paint, paper and plastic covers, they made Earth and Sun artworks. It was their first time doing such an activity.

To further enhance astronomy awareness, the school was given UNAWE earthballs and several astronomy and general references books to jump-start the rebuilding of their library which was washed out by the typhoon. The children also got school supplies for when regular classes start again.

The powerful typhoon Haiyan, with sustained winds of 315 km/h, hit the Philippines last November and left the eastern part of the country washed out.  The islands of Samar and Leyte were the most affected due to their location, which is yearly battered with typhoons. 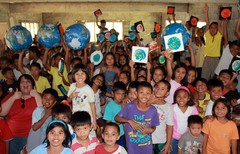 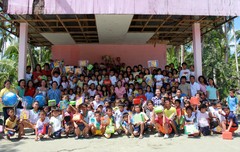 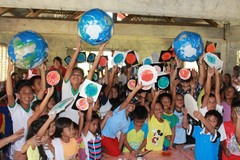 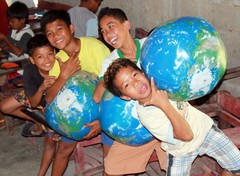