From 12 to 18 March  Grahamstown (South Africa) hosted the 18th edition of its National Science Festival— SciFest Africa 2014. This annual event, which is the largest science festival in Sub-Saharan Africa, aims to promote the understanding and appreciation of all science and technology. The theme of SciFest Africa 2014 was “Into the Space” and with more than 500 activities and over 68 000 visitors, it was a great success.

UNAWE South Africa contributed this year by offering daily workshops for children between the ages of 6 and 10. The interactive workshops on cultural astronomy—titled The Man Who Angered the Sun—were fully booked and popular with not only the young audience but also older children, parents and teachers. Children participated enthusiastically and educators repeatedly expressed their appreciation for the workshop and their interest in using cultural astronomy as a tool for astronomy education. The workshop was successfully completed by over 140 children, excluding parents, teachers and other participants.

The activities consisted of an introduction to stars and the Milky Way, a discussion on ancient cultural practices regarding the night sky and an interactive storytelling session using stories from around the world. Finally, the children formed groups to develop their own interactive stories about the Milky Way and presented them through storytelling, art and theatre.

The workshop is based on the newly developed module of UNAWE’s educational toolkit Universe in a Box, titled Cultural Astronomy. This module uses the myths and legends about the night skies from cultures around the world as a tool for astronomy education. This integration of culture and science can ‘humanise’ science and provides a stepping-stone to the understanding of modern astronomy. In addition, cultural astronomy can instil pride for a child’s own culture and an appreciation for other cultures, thereby adhering to UNAWE’s vision.

The workshop was developed and led by Tibisay Sankatsing Nava of UNAWE (Leiden University Master Student) in collaboration with the SALT Collateral Benefits Programme of the South African Astronomical Observatory and the IAU Office of Astronomy for Development.

The costs of a workshop for 140 participants was approximately 50 euro for materials. This is excluding transport and accommodation in Grahamstown, South Africa.

During this workshop the children learn about:
1. Stars (What are stars?)
2. Our galaxy, the Milky Way (what is the Milky Way? What do you see on a dark, moonless night?)
3. Light pollution
4. The importance of cultural astronomy
5. A few cultural stories about the skies (from South Africa, Australia and Japan)
6. Additionally, the children will develop skills in teamwork, creativity and presentation

While the workshops were a success, they can be further improved by supplying extra information about the Milky Way and the life cycle of stars for children who already know a lot about astronomy. This added layer is not necessary when dealing with a younger audience (ages 6 – 8) but is appropriate for those with more advanced knowledge on astronomy.

The diversity in age of the participants was a challenge, as the workshop was originally developed for children of the ages 6 to 10. However, it was possible to add an extra layer of information to the discussion of stars and the Milky Way, as well as in the development of the stories and presentations to suit the older participants. Another challenge was the group size, as several sessions were overbooked and visited way beyond the capacity. This was resolved by improvisation and introduction of activities that make minimal use of workshop materials.

According to the experiences of the educator, oral feedback from the participants and the results of questionnaires, the workshops were a success. The level was suitable for the intended age group, while simultaneously flexible enough to be adaptable for an older audience. Learning goals were achieved, as demonstrated by active participation, correct answers to questions (at the end of the session) and by the participation of all children in the final presentation of their stories. 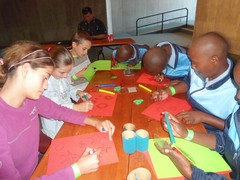 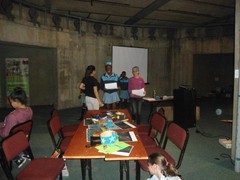 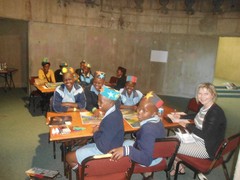 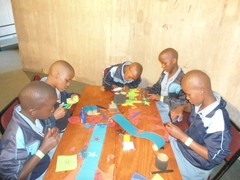