Home > News > Updates
Click to see full image
More news:
> Swiss High School Students Organise Educational Activities in Mayotte
> The sky is not the limit: 230 000 people reached by Space Awareness
> Applications for the ESA-Galileo Teachers Training Workshop Open
Where in the World is Universe in a Box?

Last year we ran a very successful Kickstarter crowdfunding campaign for Universe in a Box, our hands-on astronomy education kit. With the help of our supporters we raised more than €15,000 to send the popular resource everywhere. As a result of the campaign and the awareness it raised, more than 800 boxes are now in use around the world.

The new interactive map on the Universe in a Box page shows where these boxes have been sent to. There are boxes in Mongolia, Australia, Colombia, Italy, Brazil, South Africa and many places in between. Some of our nodes have more than one box (you can see that by the size of the points) or received many boxes for distribution in their region (a red point rather than a yellow one). 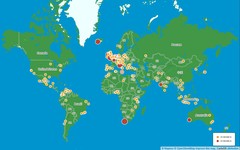 whereintheworldmap
Where in the World is Universe in a Box?