2015 was a great year for Universe Awareness. We hosted the 2015 UNAWE International Workshop in which more than 23 countries were represented and were named finalists for the WISE Awards. In 2015, Universe in a Box was also awarded the Best Science Education Resource Award by Scientix, and 800 Afghan children followed a Universe in a Box-curriculum through our partnership with Skateistan.

Educational activities and teacher training events also took place non-stop throughout the year. In 2015, we reached more than 127500 children and trained more than 1100 teachers. Our network grew: we welcomed two new national nodes in 2015: UNAWE Croatia and UNAWE Zimbabwe, and more than 770 UNAWE events were organised globally. Around the world, many activities were organised by local Universe Awareness efforts. UNAWE Vietnam successfully built its first DIY radio telescope to use in schools and every student in Iceland between 6 and 16 years old received goggles to watch the solar eclipse in March 2015. In Sri Lanka, Space Scoops were translated and published in national newspapers in 3 languages, and in Tanzania, more than 1200 children were reached through a new teacher training programme. “This year we were able to train 16 astro-science ambassadors and reached to 24 schools in the Northern Tanzania. This has been our dream in Tanzania, where astronomy education is still at basic level even to teachers”, explains the national coordinator of UNAWE Tanzania, Mponda Malozo.

In light of these achievements (and many others!) we'd like to say a huge thank you to our dedicated community, our motivated and creative network of educators, teachers, translators and students; and of course, to all the enthusiastic children and teachers who took part in UNAWE activities throughout 2015!

Do you want to contribute this year? There are a number of ways in which you can join the Universe Awareness programme: become a student ambassador, translate educational resources, organise events in your local area or help out at existing activities — the list goes on. This year we are celebrating 10 years of UNAWE: if you want to be a part of it just contact us at info@unawe.org and you can help us reach even more children in 2016! 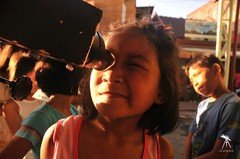 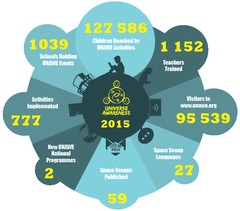