Home > News > Updates
Click to see full image
More news:
> Swiss High School Students Organise Educational Activities in Mayotte
> The sky is not the limit: 230 000 people reached by Space Awareness
> Applications for the ESA-Galileo Teachers Training Workshop Open
CAP day 2: Astronomy is a Story that has to be Told

Astronomy is all about storytelling. It has been involved in storytelling from the very early history of mankind, where the Sun, Moon and stars played a big role in mythology and religion. Nowadays, astronomy might seem less related to our everyday life. When I talk to my friends, some of them tell me they have never consciously looked up to the sky at night, and they have never realised that the stars are actually other ‘suns’ that may have many alien worlds orbiting around them.

I can’t blame them: many of my research colleagues from the astronomy department don’t know the details about our night sky themselves, like amateur astronomers do. When I ask them about their research, it is often hard for them to link it to something that I can relate to (as I don’t have an academic background in astronomy myself).

Honestly: I don’t know. As a science journalist and communicator, I love to make complicated science less complicated for the general public. So maybe I could argue that, since I studied to be a science communicator, researchers should just keep doing what they are good at: doing research. On the other hand: researchers have an obligation to communicate the relevance and findings of their research to the general public.

During the CAP conference, I realised that a lot of astronomers are very actively looking for new ways to connect all the data about the Universe that has been collected until now with the general public. Astronomy data can be audiolised, visualised, storyfied, and communicated in other ways. Astronomers started working together with artists, writers, programmers, data analysts, journalists, podcasters, vloggers, and many dedicated volunteers.

I think that’s the way forward: let’s recognise and use each other's talents to communicate astronomy with the public!

One thing I will definitely try to do more when I continue writing my articles when I get home from the conference, is to storify. I want to connect science to the world of my readers. And I want my readers to feel connected to science.

This post is part of a personal series on our experiences during CAP Conference 2016. For more about CAP2016, check out our news update. Or follow #CAP2016 on Twitter! 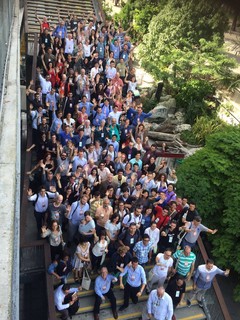