Like a team of real-life Indiana Joneses, scientists have explored our galaxy and found a treasure trove of hidden gems. These gems are much more spectacular than the diamonds that Indiana Jones might hope to find – they are collections of dazzling stars!

The majority of stars that weigh more than half as much as our nearest star, the Sun, are born in groups called ‘Open Clusters’. But stars are born in very dusty places, which makes these Open Clusters difficult to find for most telescopes. “The dust in front of these clusters makes them appear 10,000 to 100,000,000 times fainter,” explains Professor Kurtev.

However, using a new telescope called the VISTA telescope, Professor Kurtev and other astronomers have discovered 96 new Open Clusters in our galaxy, the Milky Way, that had previously been hidden from view. A small selection of these gems is shown in the image above.

Open Clusters can contain up to a few thousand stars, but most of the ones that have just been discovered only have about 10 to 20 stars each. This is the first time that so many faint and small Open Clusters have been found at once!

Only 2,500 Open Clusters have been found in the Milky Way, but astronomers think there might be another 30,000 still waiting to be discovered! Could you be the future Young Indiana Jones and find these lost gems? 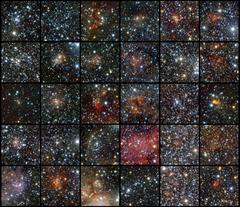 eso1128a
Raiders of the Lost Stars