Have you ever woken up in the morning and seen that it is very foggy and murky outside, but then the Sun came up and it quickly burned away? Well, something similar happened to the Universe when it was very young.

When the first stars and galaxies formed, the Universe was filled with a thick fog of hydrogen gas that stopped starlight from travelling across space. The picture shown above, which an artist drew on a computer, shows what these early galaxies looked like.

The Universe’s first stars were huge. "About 100 times more massive than the Sun,” says astronomer Eros Vanzella. These stars gave off very strong UV light. (We know UV light as the stuff in sunlight that gives us sunburn.) This strong UV light eventually cleared the fog and allowed starlight to travel unobstructed across space.

The astronomers noticed something surprising: In the short time between the oldest and youngest galaxies in their observing project being born, the Universe had gone from being very foggy to almost clear. This happened “quicker than astronomers previously thought,” says astronomer Laura Pentericci. 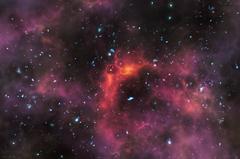