This eerie new astronomy picture looks like the 'Eye of Sauron' in the film The Lord of the Rings. In the film, the Eye of Sauron marks the final destination of the character Frodo’s long journey. But the object shown in this picture doesn’t mark the end-point of a journey across space – it’s just one of many distance signposts that are dotted across the Universe!

Obviously, astronomers can’t measure the distance to objects in deep space by using a ruler. However, every Type 1a Supernova has the same brightness when the star explodes. This means that astronomers can work out how far away they are by how bright they look when viewed from Earth: The fainter the explosion, the further away it must be.

A single star that explodes as a Type 1a Supernova can give off as much light as an entire galaxy that contains hundreds of billions of stars! 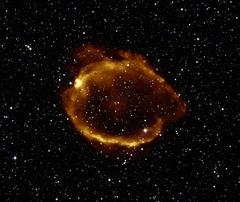 unawe1138
Lord of the Rings