Although they all formed from similar material, it is a mystery why the planets closest to the Sun – Mercury, Venus and Earth – are so different. Astronomers hope to learn more about how they were created by studying asteroids, which are pieces of rock that were surplus to requirements in planet building.

A team of astronomers has been observing an asteroid called Lutetia that is 100 kilometres wide. It is so big that if you put it on the Earth’s surface, one side would reach into space! Like most of the asteroids in the Solar System, Lutetia is found between the planets Mars and Jupiter – a region that is called the Asteroid Belt.

However, the astronomers have just found out that Lutetia hasn’t always lived in this part of the Solar System. They realised this when they discovered that the asteroid is made from the same material as is found in a rare type of rocks that have fallen to Earth from space, called ‘meteorites’. (Meteorites are much smaller than asteroids and range in size from marbles to basketballs.)

Now, astronomers want to send a spacecraft to Lutetia to bring back some samples of the asteroid so that they can study it in a laboratory. “Asteroids like Lutetia represent ideal targets for future sample return missions. We could then study in detail the origin of the rocky planets, including our Earth,” concludes astronomer Pierre Vernazza.

Earlier this week, a different asteroid that is about 400 metres wide hurtled past the Earth. Because it came so close to our planet – it was closer than the Moon! – it is called a Near-Earth Asteroid. 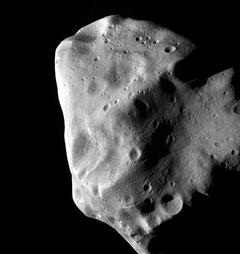