Like a soda drink moving around in a glass, huge clouds of hot gas are sloshing back and forth in this new space picture.

The picture shows a collection of galaxies, which is known as a Galaxy Cluster. The gold regions pick out the individual galaxies, while the blue parts of the image show hot gas, which is about 30 million degrees Celsius!

The big spiral of hot gas was created when a small Galaxy Cluster smashed into a larger one in the centre of the photo. Collisions like this in space don’t happen in one quick bang. Instead, the smaller galaxy cluster danced back and forth, approaching the large Galaxy Cluster and then going past it, before coming back again. It did this several times, each time staying a bit closer, until it eventually combined with the larger Galaxy Cluster.

This Galaxy Cluster is so far away that it has taken light about 480 million years to travel from it to the two telescopes – one on Earth and the other in orbit around our planet – used to create this picture! 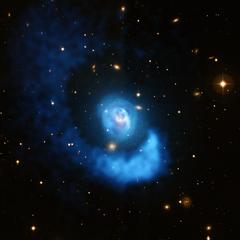