The light from hundreds of billions of stars in a galaxy has combined to fill this new space picture with a soft glow. It’s hard to see the shape of this galaxy because its light gently fades away as you move away from the centre, with no solid boundary to mark the edge.

To see the shape of this galaxy, first click on the photo to see it in full. Now, imagine drawing an outline around the glow of light with a black pen. You should see that it has an elliptical shape, like a rugby ball. Astronomers call galaxies with this shape ellipticals. There are also galaxies that look like whirlpools in space, which are called spiral galaxies, and a wide variety of irregular galaxies. (Our Galaxy, the Milky Way, is a spiral galaxy.)

Ellipticals are the biggest galaxies in the Universe and their stars orbit around the centre in all directions. This makes them very different to spiral galaxies, in which all of the stars orbit around the centre as though they can only move on the same invisible flat surface. Basically, if an elliptical galaxy is like a rugby ball, then a spiral galaxy is flat and thin, like a dinner plate.

And unlike spiral galaxies, ellipticals are usually dust-free. However, this elliptical galaxy does contain some dust, which can be seen as a wavy band across its centre. Astronomers think this is probably the remains of a spiral galaxy that is being ripped apart by the strong gravity of the elliptical galaxy!

To gather enough light from the galaxy, it took 50 hours to take this photo! That’s a very long time to say “cheese”! 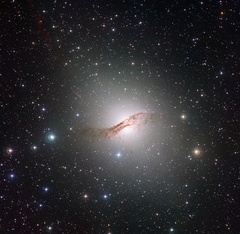