Astronomers have used a new technique to see the faint light from a planet that is orbiting a distant star. This is incredible, because planets are much dimmer than stars and are usually drowned out by starlight. (It’s like trying to see a glow-in-the-dark toy in a room that is brightly lit.)

Nearly 800 exo-planets (what astronomers call planets that are not in our Solar System) have already been found. Because they are very dim and far away, they didn’t see most of them directly through a telescope. Instead, astronomers found them by looking for telltale clues, such as how the light from a star dims when an exo-planet passes in front of it, or how it wobbles because of the pull of an exo-planet’s gravity.

However, there is a problem: Planets that pass in front of their stars are rare, as it requires the distant star, the exo-planet and Earth to be perfectly lined up.

But now astronomers have come up with a clever new technique that means it is possible to pick out the dim light from an exo-planet, without it being drowned out by starlight. And unlike the handful of exo-planets that have been photographed before, astronomers can use this new method to study the light from exo-planets. This means that they can learn about their atmospheres and what the environment is like on many more of these distant worlds! 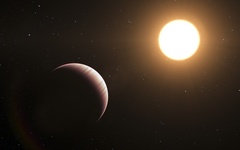 eso1227a
A Flicker of Hope to Study Dim Planets