The ball of stars at the centre of this photograph is unbelievably old. These stars were burning before the first humans walked on Earth, before there even was an Earth. This group of stars, called a globular cluster, is actually 10 billion years old — that's almost as old as the universe itself!

Globular clusters contain tens of thousands of ancient stars that all formed around the same time, from the same material. But strangely, these clusters sometimes contain stars that look suspiciously young, raising the question: are these clusters really the ancient relics that we believe?

Stars don't go grey-haired as they grow older, but in some cases their colour does give us a clue to their age. For example, most yellow stars become red giants towards the end of their lives. In this photograph, there are lots of red giant stars and very few yellow stars.

Likewise, we can assume blue stars are comparatively young. This is because blue stars burn very bright and hot which takes a lot of energy, so they consume their fuel very quickly and don't live as long as dimmer stars. Surprisingly, there are  quite a few blue stars in this cluster. If they formed 10 billion years ago with the rest of the stars, they should have fizzled out long before now. How did they survive?

It turns out these mysterious intruders are 'blue stragglers'; old stars that have found the secret to a youthful appearance. Astronomers believe that most blue stragglers form when two stars orbit each other in a binary system. The smaller of the two stars feeds off material from its companion. This provides extra fuel for the smaller star allowing it to burn brighter and bluer, with a fresh young look!

It's believed that all globular clusters have a medium-sized black hole lurking at their centre! 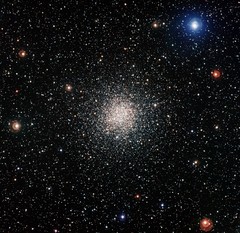