Makemake, a dwarf planet in our Solar System, appears to have no atmosphere; it is bald! This means it’s not able to hold on to the few sunrays it receives at its distant location, which is even farther away from the Sun than its cousin, Pluto.

Until a few years ago, Pluto was considered to be the most distant planet in our Solar System, until it was downgraded to a dwarf planet like Makemake. Dwarf planets are basically too small to be labelled as planets, but they still are spherical objects – like planets – and bigger than asteroids. We know very little about our closer dwarf planets, and knew practically nothing about Makemake. To study this remote object, astronomers had to wait for it to move in front of a star. So they waited. And after a while, their patience was rewarded.

If there was an atmosphere around Makemake, the star would have slowly faded away as the dwarf planet blocked it. Like the sunset on Earth, when the star at the centre of our Solar System — the Sun — gradually dims as it disappears below the horizon. But with Makemake, the background star suddenly disappeared and reappeared again after one minute, with no gradual dimming. This tells us that Makemake lacks an atmosphere and it must be colder than we expected, even colder the North Pole in winter!

Learn more about how an atmosphere can affect what a planet's alien inhabitants might look like:Design your alien!

Besides Makemake there are four other known dwarf planets in our Solar System: Pluto, Ceres, Haumea and Eris. 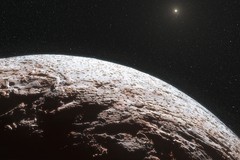