The Hubble Space Telescope is helping us get into the Christmas spirit with this colourful new space picture. The swirls of gas dancing across the photograph look just like a shining ribbon in space, similar to those that will be wrapped around your Christmas gifts in less than two weeks! Now flip the image around in your head and it looks just like a giant “S”—for Santa!

What we're actually seeing in this awesome photograph is a planetary nebula: a glowing cloud of gas and dust. As well as being beautiful to look at, these shining structures also show us the future fate of the Sun (the star at the centre of our Solar System).

In around five billion years, the Sun will move into a new stage of its life: the red giant phase. When the Sun finally runs out of fuel to burn, it will swell up into a red giant star, hundreds of times its current size. At such an enormous size, it will begin to lose control of its outer layers, which will finally blow away into space. The gas and dust shed by the star will form a stunning nebula. This is how the planetary nebula in this picture formed, too.

To get an idea of just how big the nebula in this image is, think about this: each tiny knot of material is about the size of our Solar System! And while the star at the centre of the nebula is about the size of the Earth, it appears as just a tiny point of light in the centre of the picture. Can you spot it, wrapped up in the ribbon of gas and dust like a Christmas present?

Speaking of Christmas, have you heard of the 'Star of Bethlehem' from the Nativity story? Christians believe it was a bright object that heralded the birth of Jesus Christ. Well, whether you're religious or not, you might be interested to know that astronomers think that they've discovered exactly what this biblical beacon really was—Jupiter and Venus! Both these planets would have shined extremely brightly over the Middle East on the night of Jesus' fabled birth. Who says science and religion don't get along?!

This Space Scoop was based on an ESA/Hubble press release. 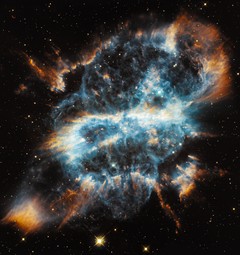 heic1220a
A Christmas Gift from Space