The Universe is an old neighbourhood; it's about 13.8 billion years old. Our galaxy, the Milky Way, is also ancient, some of its stars are more than 13 billion years old. But it's still a lively place, with new objects forming and others being destroyed. In this image, you can see a group of young newcomers to our solar neighbourhood.

But how young are these stellar kids really? It turns out that their exact ages are uncertain, but astronomers think that they range from 20 to 35 million years old. That doesn't sound very young at all, does it? Then again, our Sun is 4600 million years old, and it hasn't even reached middle age yet. This means that if you imagine that the Sun is a 40-year-old person, the bright stars in the picture are three-month-old babies!

Most stars don't form alone. They are born with tens or thousands of other stars, in 'clusters'. All the stars in a cluster are born from the same material at around the same time. This picture shows an 'open' star cluster. These usually live just a short time, before the stars begin to drift apart forever. But there's something odd about this cluster: there are one or two yellow and red stars, which are much older. Can you spot them?

One of the oldest open clusters known is Messier 67. It is a whopping 3.7 billion years old! Astronomers think it has lived for so long because it lies in an isolated part of the Milky Way, so there aren’t any heavy space objects around to pull its stars apart! 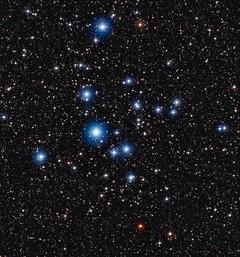 eso1316a
New Kids on the Block