What do you see when you look at this space picture?

If you answered 'a galaxy', or better yet, 'a spiral galaxy', you're right! But can you believe that not once, but twice, this galaxy has been misidentified by professional astronomers? When it was first observed by Pierre Méchain way back in 1780, he thought it was a nebula (a glowing cloud of gas and dust). Then, a few years later, Charles Messier called it a 'star cluster', which is a group of a few thousand or million stars bound together by gravity (far less stars than in a galaxy). Nevermind Charles, you were only wrong by a few 100 billion stars!

But before we judge Pierre and Charles too harshly, we have to remember that telescopes were still quite a new invention in the 1700s. Comparing the quality of early telescopes to the Hubble Space Telescope is like comparing a toy car to a Ferrari. Can you believe it was less than 100 years ago that we found out there are other galaxies in the Universe than our own? These days, we know the Universe contains hundreds of billions of star-filled galaxies.

These galaxies come in all different shapes, sizes and types. This picture doesn't just show a spiral-shaped galaxy , this is also the closest example of a 'Seyfert galaxy'. This is an extremely energetic type of galaxy that is full of hot, glowing gas and ejects huge amounts of intense radiation from its dark core.

In a single image of a tiny patch of the night sky, Hubble photographed thousands of galaxies! You can see this picture here. Doesn't it make you realise just how gigantic the Universe is?

This Space Scoop is based on Press Releases from ESA, Hubble Space Telescope. 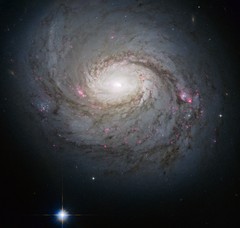