In 1992, a discovery was made that changed our view of the Universe: the first alien world was detected circling a distant star. Before this, the existence of these so-called “exo-planets” had been suggested but not proven. But with this discovery in 1992, there was no denying it — the Earth and its brothers and sisters in our Solar System are not alone.

Since this first discovery, almost 1000 exo-planets have been identified. In fact, it is now believed that about 2/3 of the stars in the Milky Way probably have at least one planet surrounding them! You may wonder why despite there being so many alien worlds we hadn’t detected a single one until 1992. Well, photographing exo-planets is very difficult, because planets are much dimmer than stars and are easily outshone by the light of their parent stars.

To overcome this set back, astronomers had to be creative. One of the most successful techniques for identifying exo-planets is “radial velocity”. This clever trick looks to see if stars wobble. The wobble is caused by a very faint planet using gravity to tug on the star, as it orbits.

In 2008, astronomers finally managed to capture the magical photograph of a distant planet! In the five years since, only a dozen planets have been caught directly on camera. Actually, make that 13, as the Very Large Telescope just captured another planet. You can see the fuzzy blue shape of the planet orbiting it's parent star in this picture. And it's the lightest exo-planet ever photographed, too!

There have been many “firsts” since the hunt for exo-planets began. In 1992, astronomers found the first exo-planet orbiting a Sun-like star. In 2007, the first planet that could have oceans of liquid water was detected! And orbiting the same star was another planet, which turned out to be the first world outside Earth that has serious potential to support life! 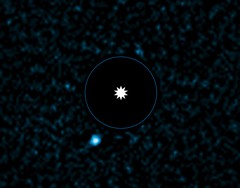