If you're a regular reader of Space Scoop, you probably know that the Universe is unimaginably vast (unless you have a much bigger imagination than mine!). It might be a surprise then, to learn that less than 100 years ago, the greatest minds in astronomy were still fighting over whether or not our galaxy made up the entire Universe! This so-called ‘Great Debate’ came to an end in the 1920s when Edwin Hubble proved that the Andromeda Galaxy is a separate galaxy from our own.

Since then, we've realised that there are billions of galaxies floating around out there! And each one is made up of millions of huge, burning suns. In such an enormous crowd, there are bound to be some oddballs. In 1966, an astronomer called Halton Arp decided to catalogue these misfits, so he created the ‘Atlas of Peculiar Galaxies’. He chose his targets based on their weird appearances, but it was later realised that many of them were in fact galaxies crashing into each other and merging together.

This sharp photograph shows a pair of these galaxies from Arp's catalogue. When two galaxies stray too close to each other, they begin to pull at each other with their gravity. This causes spectacular changes to both objects. In some cases, the two can merge together; but in others, they are ripped apart! Just below the centre of this image is the blue, twisted form of a galaxy nicknamed ‘the Penguin’. Once a grand spiral galaxy, the Penguin has been torn apart by the gravitational pull of its cosmic partner, which you can see here as a bright white oval. The pair show an uncanny resemblance to a penguin safeguarding its egg!

No person in history has had a greater impact on revealing the true extent of our vast, vast universe than Edwin Hubble. Not only did he prove that other galaxies than ours exist, he also proved that galaxies are moving apart from one another! 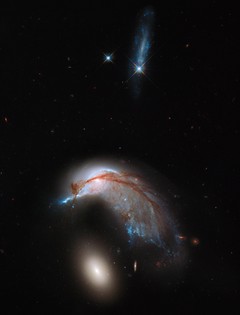 heic1311a
The Atlas of Peculiar Galaxies