Earth is known as the ‘blue planet’ because of the vast oceans that cover two-thirds of its surface. When seen from space, our world looks like a pale blue dot. You might recognise image 2, it is a photograph of the Earth that was taken in 1990 by the Voyager 1 spacecraft when it was 6 billion km away! But now, for the first time ever, astronomers have uncovered the colour of a planet orbiting a distant star—and it's blue, too!

But that's where the similarities between the two planets end. The new world, or the ‘deep blue dot’, is an enormous gas giant, similar in size to Jupiter, the largest planet in our Solar System. It orbits very close to its star, leading its atmosphere to reach scorching temperatures of over 1000°C. You might wonder how blue oceans can survive in this extreme environment. Well, unlike Earth, it isn't water that gives this world its lush blue colour. Its atmosphere is filled with something similar to glass particles, called ‘silicates’, which sparkle blue.

To make the environment there even less like Earth's, it rains glass on this planet! And the glassy rain comes down in sideways torrents, blown by howling winds moving at 7000 km per hour! While the words ‘pale blue dot’ make us think of calm, tropical waters and light summer rain, this ‘deep blue dot’ is all sharp, raging storms and boiling heat.

So far, the ‘pale blue dot’ is the only picture to have been taken of our planet from such a large distance. But on 19 July this year, the Cassini spacecraft will be pointed at Earth for a photo-shoot. Cassini is currently over one billion km away, orbiting Saturn. Get ready to smile! 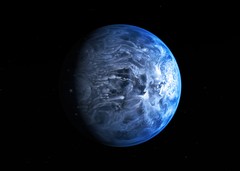 heic1312a
The Other Blue Planet 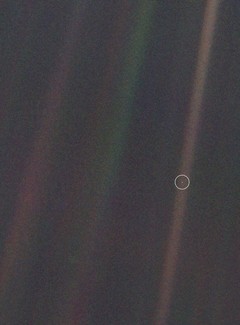