Before the telescope was invented in the 17th century, people thought that the Earth was the centre of the Universe. They thought the Sun, the planets and all the stars revolved around us! It was only when we had the technology to peer deeper into space that we realised that not only does the Earth move around the Sun, but the Sun moves around the centre of our galaxy, the Milky Way!

In the last 100 years, telescopes have been advancing at an unbelievable rate. Now we have huge radio telescopes that stretch over 50 kilometres, and we even have telescopes that have been launched into space! With these powerful instruments, we can reveal the secret wonders of the Universe that our ancestors never dreamed of!

Take this picture, for example, it shows a planetary nebula, which is the remains of a star that was ripped apart by a violent explosion. This one is called the "Clownface Nebula", can you see why? It looks just like a clowns head, complete with a crazy hairstyle and a big, shiny nose at the centre!

This object was first spotted in 1757, but today we are still discovering new details about it! Shown in purple is gas that burns at a blistering one million degrees. The red, green and blue pattern shows the ejected outer layers of the exploded star. Much more recently, astronomers realised that a very hot pair of stars lives at the centre of this gassy cloud, and they are orbiting each other!

Galileo Galilei was the first person to point a telescope at the sky. In his lifetime, he completely overturned our understanding of the Universe. He showed us that the Moon isn't smooth but covered in craters; that the Sun has spots; and that Jupiter has moons of its own! 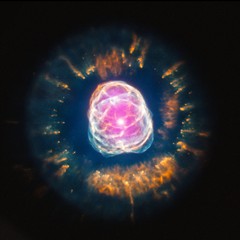