Let's imagine that this picture is the view from your bedroom window. What do you notice first as you're gazing out? Probably the big, blue stars scattered across the picture. These are stars in our galaxy, fairly close by, which is why they appear so large and bright.

If we zoom in further, what do you see? It's hundreds of distant galaxies! Grand, spiral galaxies; irregular, shapeless galaxies; young blue galaxies; and older red galaxies. This picture has everything! And doesn't it blow your mind to realise that each of the tiny dots in this picture is a galaxy containing billions of stars, many of which are much bigger than our Sun?!

Did you know that looking at this picture has given you a super-power? You're time-travelling into the past! How? Well, light takes time to travel through space to our telescopes, and our eyes. So, if we look at very distant objects, like these galaxies, we're looking at very, very old light. Although this photograph was taken recently, you're looking at these objects as they were when they were young!

Obviously, this isn't really the view from your window; it's the view of the Hubble Space Telescope. This telescope is orbiting over 500 km above the Earth's surface.

Every 97 minutes, it completes an orbit around Earth, moving at about 8 km per second—which is fast enough to travel across the United States in about 10 minutes. As it travels, Hubble's camera captures light, so that we can enjoy these breath-taking views of the cosmos. Have a look at the top 100 Hubble images here.

But Hubble has done some pretty solid science, too! It's helped us work out the age of the Universe and shown us alien worlds. It has even introduced us to a mysterious, invisible force that is stretching the very fabric of our Universe. A force so strong that one day, it might tear the whole place apart!

The Hubble Telescope is close to retirement. Sometime after 2014, its vital systems will fail, making it useless. Unless some kind of rescue mission is attempted (which is pretty unlikely), it will re-enter the Earth’s atmosphere and burn up sometime between 2019 and 2030. 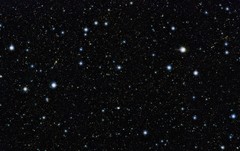 heic1313b
A Window to the Universe