Astronomers cannot see what our Galaxy (which is called the Milky Way) looks like because we are on the inside looking out. But they can work out its shape by carefully studying its stars and working out their distances from us.

By doing this, astronomers have reasoned that the Milky Way is spiral-shaped, with many winding arms. However, the exact number of spiral arms has been a matter of debate for many years.

In the 1950s, astronomers used radio telescopes to map our Galaxy. They focussed their observations on clouds of gas in the Milky Way in which new stars are born.

Their study revealed four main spiral arms. NASA’s Spitzer Space Telescope, on the other hand, scoured the Galaxy for stars emitting infrared light. Our eyes cannot see infrared, but stars, like our Sun, shine in this light. It was announced in 2008 that Spitzer had looked at about 110 million stars, but only found two spiral arms.

Now, a 12-year study of massive stars has confirmed that our Galaxy does indeed have four spiral arms, as we believed 60 years ago. This puts to rest years of debate sparked by images taken by NASA’s Spitzer Space Telescope that showed only two arms.

“The Milky Way is our galactic home. By studying its shape we can understand how other spiral galaxies work. For example, we can find out where in these galaxies stars are born and why,” said Professor Melvin Hoare from the University of Leeds. He is one of the astronomers who rediscovered the Milky Way's third and fourth spiral arms.

Our Solar System doesn't lie in the centre of the Milky Way, or even at the edge. We lie in the outer part of a spiral arm called the Orion Arm. It takes around 200 million years for the Solar System to orbit the galactic centre once! 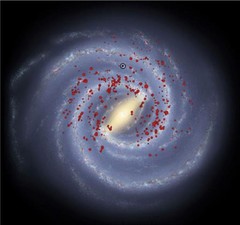