Using the Very Large Telescope in Chile, astronomers have captured this priceless photograph of what looks remarkably like a diamond engagement ring!

The blue bubble is a planetary nebula known as Abell 33. Planetary nebulae are created when an aging star blows away its outer layers of gas in a gigantic cosmic bubble.

Unusually, Abell 33 appears to be a perfect circle in the sky. Being perfectly round is rare for these objects because usually something disturbs them and causes the nebulas to morph into irregular shapes.

Creating the illusion of the cosmic diamond is a bright star along the rim of the nebula. In reality, the star lies much closer to Earth than the nebula. The star is about 700 light years away, that is halfway between Earth and the nebula. However, the chance alignment in this photograph creates a marvellous illusion.

At the centre of the ring, you can see the remains of the star that created this planetary nebula, now a white dwarf. Visible as a tiny white pearl, this star is still bright — brighter than our own Sun — and shines enough light to make the bubble of gas glow.

The interesting thing is that the white dwarf star will eventually form a core of crystallized carbon, much like diamond!

Eventually, over a very long time, each white dwarf will cool to temperatures so low that it will no longer shine at all, and it will become what we call a “black dwarf”. 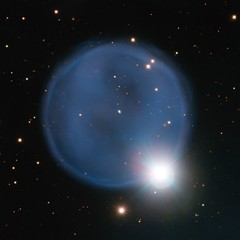 eso1412a
Diamonds in the Sky