Home > News > Space Scoop
Click to see full image
More news:
> Galactic Pollution
> A Gentle Giant
> What Does a Black Hole Eat for Breakfast?
A Journey to the Edge of the Universe

What happens when you point the Hubble Space Telescope to a seemingly empty patch of sky? You get a view that takes you to the edge of the Universe!

This photograph shows a tiny patch of sky. If you lined-up 10 similar sized patches of sky in a row, the whole thing still wouldn’t appear as wide as the Moon. But, despite being so small, this one patch of sky contains around 10,000 galaxies, some of which are over 13 billion light years from Earth!

This tiny patch of sky was previously photographed by Hubble in 2004, but the original image left astronomers in a curious position. The picture told them a lot about stars being born in nearby galaxies and also star birth in the most distant galaxies.

However, there was very little data on star-formation happening in between, at a distance of 5 to 10 billion light years away (around 5 to 10 billion years ago). This happens to be the period in which most of the stars in the Universe were formed. This left a significant gap in our knowledge of the hottest, most massive and youngest stars.

These stars shine large amounts of ultraviolet light (the kind of light that causes sunburn). So, NASA and the European Space Agency (ESA) used the Hubble Space Telescope to carry out a study called the Ultraviolet Coverage of the Hubble Ultra Deep Field (UVUDF) project, to fill in this gap in knowledge. This picture is composed of many images collected during this project.

By observing using ultraviolet light, this project may help us to fully understand how stars formed and how galaxies grew in size from small collections of very hot stars to the massive structures they are today.

The Hubble Ultra Deep Field image was just one of a number of images taken by NASA and ESA. The latest is called the eXtreme Deep Field and was created by combining Hubble images taken over 10 years. The faintest galaxies in the photograph are 10 billion times fainter than the human eye can see! 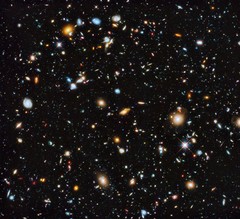 heic1411a
A Journey to the Edge of the Universe