Fierce and continuous nuclear explosions at the hearts of stars cause them to shine. Most other objects in the Universe can only be seen because they reflect light from stars, including all eight planets in our Solar System and the moons orbiting them.

Occasionally, a rare event occurs and the Sun’s light is blocked from reaching an object. These events are called ‘eclipses’.

The same thing can happen on any planet that has moons, although as far as we know only Earth has life to watch it happen!

During a lunar eclipse we expect the Moon or moons to be hidden in complete darkness because the planet is blocking the light from the Sun. But, when astronomers recently watched the four largest moons of Jupiter (Io, Ganymede, Calisto and Europa) travel into the planet’s shadow — this didn’t happen. The moons became much dimmer, but mysteriously, they were still partly lit up!

This was a surprise for the astronomers, but it’s not actually that unusual. The same thing happens when we are lucky enough to experience a lunar eclipse on Earth. The Moon darkens and becomes a blood red colour, but it doesn’t turn black.

The reason that the Moon appears to change colour instead is that the dust in Earth's atmosphere is acting like a light prism and refracting, or bending, the light that strikes the Moon. And the same thing happens because of Jupiter’s extra-hazy atmosphere!

Jupiter is actually 100% atmosphere and has no kind of solid surface whatsoever! However right at the core it might be dense enough for the gases to turn into a liquid. 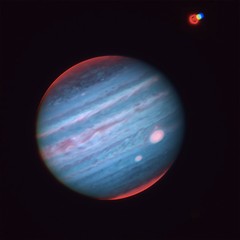 Jupiter_lunar_eclipse
Jupiter's Largest Moons Won't be Overshadowed, Even by an Eclipse!