Space can be a dark and lonely place, which is why Rosetta is travelling with a friend! When the spacecraft left Earth ten years ago it carried with it a little probe called Philae.

Since its launch 10 years ago, Rosetta has been the star of the show. The spacecraft has spent the last decade soaring through the Solar System, flying past Mars and Earth several times and visiting a couple of asteroids, before reaching it’s final destination last month at comet 67P/Churyumov-Gerasimenko.

But in November the spotlight will switch to Philae, when it heads out on a mission of its own – to become the first probe to land on the surface of a comet!

For the last six weeks Rosetta has been travelling alongside comet 67P, scouring its surface for the perfect landing site. By the end of August scientists had narrowed the search to five candidate regions. And this week, Philae’s landing place was finally announced as a region that has been labelled Site J.

On 6 August Rosetta sent back the first close-up photographs of comet 67P and what they showed surprised everybody. The comet looks unlike any that has been seen before. It is formed of two separate parts, which are known as the ‘head’ and ‘body’. Site J is located on the ‘head’ of the comet.

The unusual shape of the comet makes it a fascinating object to study, but an exceptionally challenging landing pad. Site J was judged to be the safest site, with gentle slopes, few boulders and enough sunlight to keep the solar-powered probe alive.

But the site will also allow Philae to carry out some exciting science experiments. It will collect samples of the comet to study in its portal laboratory revealing for the first time the exact shape and make-up of a comet!

Find a picture of comet 67P. What do you see when you look at it? Many people think it looks just like a rubber duck. In fact, this is such a popular description that ‘rubber duck’ has now become its official nickname! 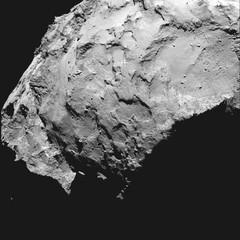