In November 2000 one of humanity’s greatest dreams came true – the International Space Station was built and we finally had a base for humans in space!

The International Space Station, often called the ‘ISS’, is a special kind of spacecraft floating in space around the Earth. It’s slightly bigger than a football field and heavier than 450 cars combined, but the ISS whizzes around the Earth 16 times every day!

The huge space station acts as a laboratory and house combined. Up to six people can live aboard the ISS at once and they can stay there for up to 6 months.

While on board the crew run all kinds of science experiments that can only be done in space. They range from biology to astronomy, such as experiments to tell us the risks of living in space to help keep astronauts safe on future missions to the Mars and beyond!

ESA astronaut Alexander Gerst is now more than halfway into his six-month mission on the ISS called ‘Blue Dot’. This mission will deliver over 100 exciting science experiments designed to improve life on Earth, test out new technologies and prepare for further exploration of the Solar System and space.

For example, astronauts exercise 90 minutes a day to stay fit and keep their bones and muscles healthy while they live in space. But a post-workout shower isn’t an option on the ISS. One of the Blue Dot experiments is testing two new clothing fabrics that can soak up sweat, keep people cool and even have cleansing properties.

Some of the experiments are slightly more challenging than others, such as those Alexander is currently running on himself! These tests will help us find out how people’s bodies age in very low gravity.

You can see the ISS with your own eyes from Earth! Find out when the ISS is going to be passing over you using the ISS Tracker. 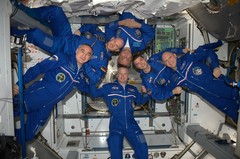