Astronomers have captured this amazing new space photograph showing the birth of a Solar System!

Earth and the other seven planets of our Solar System are not alone in the Universe. Over 1800 planets have been discovered around distant stars so far, and this number is rising!

Stars and planets form when a giant cloud of cosmic dust in space collapses in on itself. All of this gas and dust begins to move in a circle as it falls towards the centre. This is similar to the way water circles the plug hole before falling through.

The gas and dust at the centre get very dense and hot until a star is born. Around the star, the whirling cloud of leftover gas and dust begins to separate out into thick rings. It’s this part of the story that has been captured in this new photograph!

Over millions of years the particles in the thicker parts of the disc stick together, growing into larger clumps. As they grow in size, their gravity also grows. They pull more material onto them, growing ever larger until eventually planets are born!

This is the best photograph ever taken of planets forming around a newborn star, it shows an incredible amount of detail. But it isn’t just the spectacular picture that has astronomer’s excited; it’s also what it shows.

Because this star is so young, astronomers didn’t expect to see planets already beginning to form around it. This new picture tells us that planets might grow much faster than we thought!

If an alien had taken a photograph of our Solar System 4.6 billion years ago, it would have looked very similar to this one!

This Space Scoop is based on Press Releases from ESO, NAOJ. 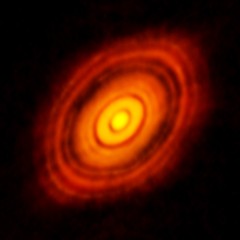