The fate of these unfortunate objects is no mystery. Lurking in the dark at the heart of our Galaxy is gigantic, hungry monster - a supermassive black hole.

Supermassive black holes are famous for their ability to swallow anything – even light! But they don't just eat; they sometimes spit too!

In late 2013, an outburst (what astronomers call ‘flares’) was spotted blasting from the center of our Galaxy. Like many flares, it was made up of high-energy X-rays. However, this particular outburst was 400 times brighter than the X-ray output normally seen coming from this black hole!

A little more than a year later, it let off another flare, this time it was 200 times brighter than usual. Astronomers have two theories about what could be causing these so-called “megaflares”. The first idea is that the black hole’s strong gravity tore apart an asteroid that strayed too close. The debris was then heated to millions of degrees before being devoured.

The other possible explanation involves the strong magnetic fields around the black hole. If these magnetic fields wobbled somehow, it could cause a large burst of X-rays. In fact, such events are seen regularly on our own Sun, we call them solar flares.

This picture shows the area around the supermassive black hole at the centre of our Galaxy, called Sagittarius A* (pronounced as “SAJ-ee-TARE-ee-us A-star”) during the giant flare from 2013.

Sagittarius A* is about 4.5 million times more massive then our Sun! 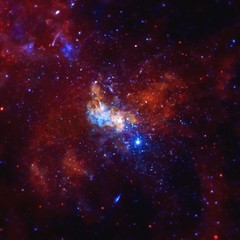