In many parts of the world, we’re heaving a big sigh of relief as the scariest part of the year comes to an end (Halloween). But the Universe has got one last fright left in store for us – a real-life zombie star!

This isn’t just a fancy dress costume, the star at the centre of the picture has actually risen from the dead…and it’s hungry.

When stars like our Sun burn up all their fuel, they reach the ends of their lives. From the outside we know this has happened when we see the star begin to swell up many times its size, becoming redder and redder as it does.

Eventually the star grows too big and the outer layers escape into space, drifting away into the void.

The hot and very compact core of the star is all that remains. We call this a white dwarf (because of its colour and size, of course!).

But what about the planets around the star – can they survive this trial by fire? If they do, what would be left of them?

Well, for the first time astronomers have been able to watch what happens when things circling a white dwarf star get too close. And it wasn’t pretty.

They found that an asteroid had strayed dangerously close to this dead star and had accidently ended up as the star’s supper.

The disc of material we see surrounding the undead star is made up of the shattered remains of the asteroid. On the bright side, the Saturn-like disc is very beautiful. Maybe the asteroid would have preferred it this way?

This star has given us some big clues to the fate of our own Solar System. Lucky that we’ve found out in advance, seven billion years should be long enough to plan an escape! 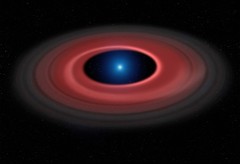 eso1544a
Zombie Stars and the Fate of the Solar System