Over the last few weeks Pokémon Go has taken the world by storm. Visit the beach and you’ll see dozens of people battling to catch water-type Pokémon like Magikarp or Krabby. Take a walk in the countryside and you’ll find yourself surrounded by grass-type Caterpies.

But what type of Pokémon would you find in space?

While the Sun is obviously not a Pokémon, it actually has a lot in common with an electric-type Pokémon called Magneton. ‘Discharge’ and ‘Zap Cannon’ are two of Magneton’s most powerful attacks.

Similarly, the Sun can create powerful storms capable of knocking out communication satellites and damaging electrical power systems on Earth!

These storms are caused by ‘magnetic fields’ on the Sun. A magnet (like those you can stick to your refrigerator) creates an invisible force field all around it, called a magnetic field. The Sun acts like a magnet. But how the Sun, and stars like the Sun, create their magnetic fields is a bit of a puzzle.

The inside of a star is made of layers. There’s a zone where the star’s energy moves outwards, and another where the energy circles up and down. Many scientists believe that stars' magnetic fields are produced in the area where these two layers meet.

However, stars much less massive than the Sun don’t have both these layers, as you can see in the picture above. Yet a new study has just found that they still have magnetic fields similar to stars like the Sun!

It looks like our theory understanding of magnetic fields needs to be re-examined!

We measure how powerful a star’s magnetic field is by looking at the amount of X-rays it gives off. More X-rays equals a more powerful magnetic field! 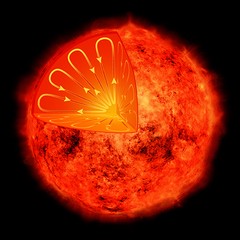 low-mass_star
Inside of a Low-Mass Star