In the last 20 years, we’ve gone from not knowing whether any planets exist beyond our Solar System, to discovering over 3,500! We call these distant worlds ‘exo-planets’.

There are several different ways to search for exo-planets, but the most successful example is called the ‘transit method’. When a planet passes in front of its parent star, it blocks a small amount of light from the star. Astronomers can watch this happen, like a shadow puppet show. If they see it happen regularly, they can assume a planet is orbiting the star.

Thousands of exo-planets have been discovered using this method; ranging from the size of Mars to bigger than Jupiter. But what we really want to know, is which of these planets might be hiding alien life.

Ideally, we want to find planets just like Earth, since we know without a doubt that life can survive here. We are hunting for planets about the size of Earth that orbit at just the right distance from their star, where the temperature on the surface is suitable for liquid water. Which is an essential ingredient for life as we know it.

The next step is to search the atmosphere (air) of the planet for particles related to life, such as oxygen. In just a few years, our telescopes will be able to carry out such delicate measurements. But to do so, we need to study the movement of each planet very precisely, so we will know exactly when and where to point our telescopes.

Recently, we took an important step towards this goal. A group of researchers from around the world managed to time the orbit of a distant exo-planet more precisely than ever by studying its shadow. Turns out this planet circles its star every 45 days, plus or minus 18 seconds.

We can also watch planets in our Solar System transit; Mercury and Venus can occasionally be seen crossing in front of the Sun. The next time you can watch this is 11 November 2019, when Mercury will transit the Sun. 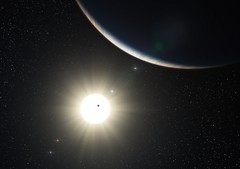