In 2015, scientists watched, stunned as a massive star reached the end of its life as a violent supernova explosion, brighter than any seen before. The explosion was 20 times brighter than our entire galaxy, outshining 100 billion stars at once. Strangely, this is more energy than it should be possible for a supernova to generate.

…or rather, it would be strange, if it were true.

Good science often means trying new things and making mistakes. Learning from these mistakes helps shape and improve our understanding of the Universe.

Scientists now believe this dazzling light-show wasn’t created by a supernova at all. Instead it was probably created by an even more extreme event – a spinning black hole ripping apart a passing star that came too close.

In this case, truth is stranger (and more exciting!) than scientists originally thought. A spinning black hole ripping apart a star with its ultra-strong gravity, is rare and has only been observed a handful of times before.

Each black hole is surrounded by an invisible boundary called the ‘event horizon’. Anything that passes beyond this line is dragged onto the black hole, with no chance of escape. However, for rapidly spinning black holes, such as this one, their destructive reach extends much further.

Even with all the collected data we cannot say with 100% certainty that the light came from a feeding black hole, but it is by far the most likely explanation.

A black hole isn't actually a hole. If anything, it's the opposite. The black hole in this story is made up of 100 million times more material than our Sun, all packed into a teeny, tiny space.

This Space Scoop is based on Press Releases from LCO, ESO. 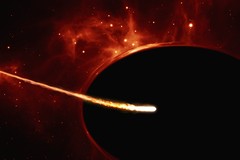