Thousands of satellites fly around the Earth. But, like everything else, satellites don’t last forever. They have limited fuel and the harsh conditions of outer space can put a lot of wear and tear on them.

When they can no longer operate, great care has to be taken to ensure they can’t damage other satellites.

Those orbiting closest to Earth are manoeuvered even closer, so when they have achieved their mission (usually within 25 years) they will re-enter the atmosphere and burn up.

But this is impossible for the more distant satellites. The amount of fuel they’d need to make it back into Earth’s atmosphere would make them too heavy to put into space. Instead, at the end of their lives, these satellites are put into the “graveyard” orbit.

The graveyard orbit is far beyond the orbits of normal satellite, further into space. Where they won’t collide with those still working.

This is exactly what happened this month to a successful satellite called Meteosat-7. After almost 20 years of service (15 more than intended!), the satellite has been maneuvered to its new and final resting place: the graveyard orbit.

Meteosat-7 was part of a group of weather satellites that continues to cover the whole Earth, providing weather forecasts and warnings. Not a single monsoon or snow storm goes undetected by them, saving of thousands of lives!

The number of satellites in the graveyard orbit is already in the hundreds. With new spacecraft launched each year, this region could also become overcrowded. Scientists are still looking for a permanent solution for this issue, including removing or collecting the old satellites.

This Space Scoop is based on a Press Release from EUMETSAT. 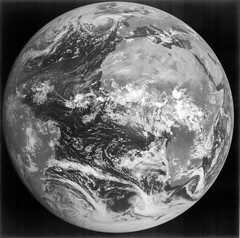