Here's an amazing fact: Every single atom in your body was cooked in a star billions of years ago — the calcium in your bones, the iron in your blood, even the gold in the jewelry you wear.

When stars die, the newly made materials are flung out into space to be recycled as new stars, planets and even people. Occasionally these atoms can stick together, like Lego pieces, building something special – organic molecules.

Organic molecules are known as the building blocks of life, because while no-one knows exactly how life began, one thing is certain; these tiny particles played an important role.

Organic molecules can be found in things all over the Earth, from the bottom of the ocean to the top of mountains. But how they are made in nature is a mystery that astronomers are still working to solve.

Earth and the other planets in our Solar System formed from the material left over after the birth of our star, the Sun. So, scientists have been studying stars similar to how the Sun looked when it was young, searching for clues to the origin of organic molecules.

And their efforts paid off! One of the building blocks of life was spotted around three separate stars, each one very similar to the Sun when it was young. The molecule was found inside the warm cocoons of cosmic dust and gas surrounding each stars!

What does this tell us? There are two main ideas about how life on Earth came about. Either life originated entirely on the surface of the Earth, or some of the building blocks were formed around the Sun before the Earth had even formed.

Based on this new discovery, it looks more likely that the second idea is correct! In this case, these organic molecules became part of the comets in our Solar System. These comets may then have delivered the materials to our planet, where they led to the rise of the very first life forms.

This star system seems to keep on giving! The new discovery comes follows the discovery of sugar around the same stars five years ago! 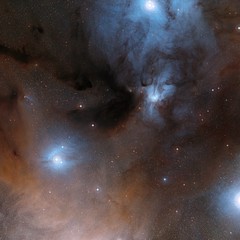 eso1604d
Piecing Together Life on Earth