When we talk about something being massive, we're not talking about its size or how big it is. Mass relates to how much material an object contains. While a ball of candy floss the size of your head is bigger than a chocolate bar, it contains less material, making it less massive. Try squashing the candy floss down with your hands and you’ll see what I mean!

Astronomers have just measured the masses of around 50 supermassive black holes in the distant Universe and found that each one is at least five million more massive than our Sun!

This is the first time the masses of so many supermassive black holes that lie so far away have been directly measured, because studying black holes is hard.

Most telescopes only measure light, but black holes have gravity so strong that even light can’t escape their pull. This makes them invisible to our telescopes and means that scientists have to be extremely creative when it comes to studying them.

Anything that changes the brightness of the inner material will also affect the outer material, but a little later. By measuring this time delay, astronomers can calculate how far the gas is from the black hole and use this information to measure its mass — even though they can’t see the details of the supermassive black hole itself!

An object with more mass will have stronger gravity. This is why Earth’s gravity is stronger than the Moon’s, which allows astronauts on the Moon’s surface to jump really high!

This Space Scoop is based on a Press Release from Sloan Digital Sky Survey. 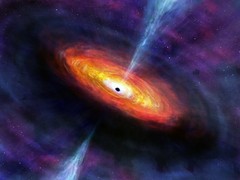 AGN-reverb
How Massive Is Supermassive?